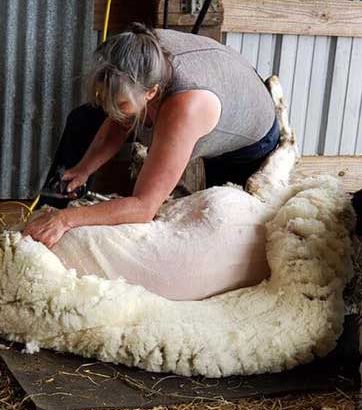 It so often happens that we take steps toward change in our lives but don’t grasp the consequences until we’re knee deep in it. It’s like that with sheep, only more so.

Unless one lives in New Zealand, I suppose the average person doesn’t spend much time thinking about wool removal. But the matter of separating the wool from the sheep is a serious social and health problem and it’s a scandal that more news coverage is not given to this annual crisis. Hapless farmers start calling around to shearers starting in February, lighting candles, sending entreaties to the patron saint of sheep, promising the shearer their firstborn son on countless answering machines, waiting by the telephone like a teenaged girl in love. By June things are getting bad. No one calls back, the only shearer on the registry lives in Texas, and sheep are starting to organize into hot, sweaty, panting angry mobs – do you know how alarming it is when your sheep threaten to form a union on you?

A fleece can weigh anywhere from 4 pounds to 20 pounds. Much of this weight is in lanolin, which normally is washed out during the wool processing; so we’re talking about hot, sweaty, panting sheep carrying mounds of greasy wool on their bodies which gives them more momentum should they decide to fling themselves at you either in a rage or begging for mercy, equally likely possibilities. And remember: sheep do things in groups; they walk together in formation, eat jowl by jowl, sleep piled next to each other. Wooled and in a pack with nary a shearer in sight, they are a formidable force.

It was the year I had to keep my sheep locked in the barn for 2 days while it poured down rain waiting for the shearer to arrive that I decided to take one of those steps toward change. Don’t ask me how deep I’ve stepped into it.

At the Delaware/Maryland Sheep Shearing school, the first thing the instructors told us was “always remember that a sheep shearer is a shepherd without a brain”. I saw their point, because after finishing not one but two years’ worth of sessions of the school (remedial learning….), I went out and started shearing people’s sheep for free to “gain experience”. Experience for what?!

It’s like this: you’re bent over at about a 60 degree angle balancing a kicking, baa’ing, hooved beast (who weighs an average of 200 pounds) on its bottom, while holding a hot, powerful, vibrating cutting tool that could sever an artery or a sensitive body part in an instant (yours or the sheep’s). Hamstrings are stretched to their limit, biceps hurt after the first 3 minutes, and the mind is as concentrated as a surgeon’s — all the while sweat drips down your face into pools on the floor as you handle the wool with the delicacy of lace so as not to damage the precious material. This is what I call a full body workout, otherwise known as a quick weight loss plan, otherwise known as saving money not having to join a gym.

I never was into running. I tried in high school for about 2 weeks; I reluctantly was up to 3 miles when training for soccer in my thirties. But I hated it. I never really could understand why someone would run unless being chased by gangsters or mad goats. I heard about the euphoria, the floating sensation, the incredible well being that runners experience; but frankly the closest I ever got to a floating sensation was when consuming a hot fudge sundae with walnuts and fresh whipped cream. So you may well ask what I am doing with my shingle hung out as a shearer. Or didn’t I mention that part?

The scarcity of available shearers is so severe that when just one sheep person got my number, I suddenly found myself listed in the local Agricultural Extension office’s directory and overwhelmed with desperate phone calls from Virginia to  Pennsylvania. With great trepidation I began accepting payment for my services, rendered painstakingly slowly and with such fear of appearing a fool or worse, hurting a sheep with my inexperience. Job after job, flock after flock, I earned my bruises and cuts, and left a trail of naked sheep behind me.

Some time around 11:30 on a Sunday night, driving home on dark country roads after a long job with a large flock, overalls drenched in sweat, bags of donated wool in the back of my car, I floated. I couldn’t believe it! This was it! The runner’s euphoria! I had now reduced my shearing time from 40 minutes to 15 (soon to be 3-5!), figured out some hand movements to better control the clippers, found ways to keep the sheep comfortable during the process, and moved easily from one position to the next, got the fleece off in one piece.  Cool. Zen. I don’t expect anyone to understand. I called my Dad for Father’s Day and told him of my new “profession” and he asked if this was why he sent me to Yale. But it’s OK. The sheep and I are working on forming our own union, and it’s gonna be great!

4 thoughts on “The Zen of Sheep Shearing”

So happy to start looking at early spring shearing

I’ve tried to figure out why these babydoll shee

Sweet Sarah May, my own sheep whom I just brought

This kitten was determined to try to go home with

Big Girls. A challenge given their size, but gener

Best gift ever for a shearer! #sheepshearing #she

These three boys RAN to the farthest corner of the

Finnsheep, objecting to my watching them as they e

Clyde, I love you no matter what. But you could ea

Itchy Badger after his fall shearing at @poplarspr

I just love cleanly shorn sheep out on fresh pastu

Waiting in the salon reception for his hair appoin

Before, during, and after. This ewe waited a long

Karakul sheep, raised by a Turkish man who hearken