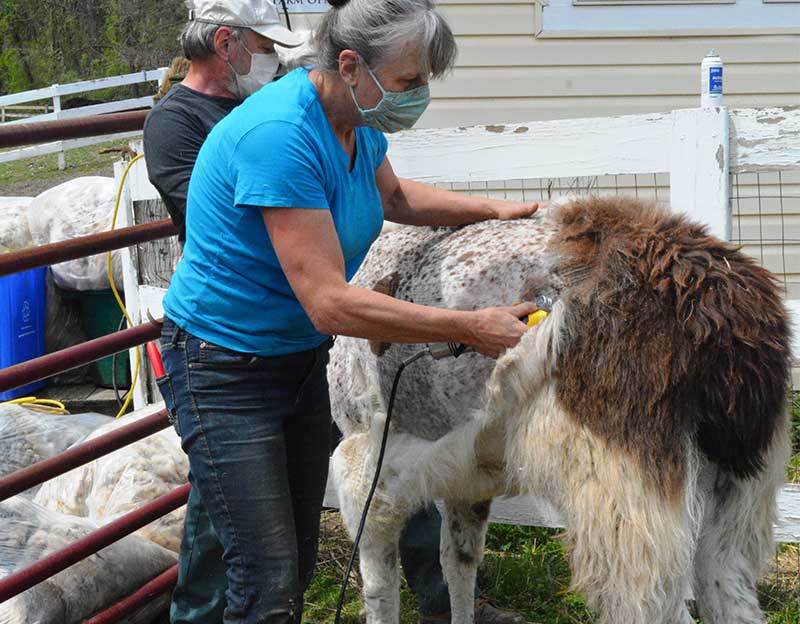 The year 2020 brought a deadly, scary, and decidedly inconvenient disease to the world.  For many people, life stopped.  There was no more school.  People didn’t go to work, or they worked from home as best they could. People were afraid to go shopping; delivery services blossomed while restaurants and bars went belly up.  People didn’t have money or, sometimes, food.  The world we were used to was no longer safe.

My fellow shearers and I discussed what to do.  Some shearers decided to postpone the start of their season.  Others put into place extremely stringent measures for biosecurity and told owners to stay inside while they sheared.  Still others didn’t seem worried at all.  Knowing the Florida heat would arrive too soon, I made the difficult decision to conduct my shearing as planned, but taking great care both for my own health and for that of those around me.

So when, at one of the first farms I stopped at, the farmers said to me in parting, “be safe”, I stopped and thought.  Yes, they were right.  I needed to “be safe.”    I’ve travelled quite a bit in questionable parts of the world with unstable governments, and felt, generally, safer than I did on route 95 south in March of 2020.

“What a long strange trip it’s been.”

This “be safe” became a refrain that people would now use nearly all the time.  It was more, though, than “have a nice day” which after all these years often just means “don’t let the screen door hit your bum on the way out.”  For a while, at least, it really seemed to convey concern.  Maybe it still does.  Months later, this virus is still ravaging the country.

A friend I stayed with in North Carolina gifted me a huge packet of disinfecting wipes.  Best. Present. Ever.  These I used at every hotel I stopped at, wiping down surfaces, TV remote, sinks, doorknobs.  It lasted me the whole trip and then some. Costco didn’t have any for months after that, nor did anyone else, for that matter.

Some of the farmers made baskets of food and drink for me to take on my journey.  More than once these packages fed me when literally nothing else was to be found.

I’d brought a number of face masks and gloves with me; this was before they were even fashionable.  In Florida Walmarts, I was pretty much the only one dressed like I was about to perform an appendectomy.  The hoi polloi did not seem concerned.  They were shopping openly.  Touching things and breathing.  I was shaking in my Yankee boots. And yet … and yet …. Walmart crowds notwithstanding, the roads were empty.  Just.  Empty.  I had to take care to gas up when my tank went below half full.  I honestly didn’t know if stations would be open. In fact, gas prices were about as low as they were when I was a teenager.  At one Marathon station gas was $1.39 a gallon. I took a photo.

At my first stop in Southern Alabama, a couple had transported their sheep for shearing from farther north in the state.  I commented that I had been a tad worried about “crossing the border” from Florida (remembering some true worry I’d experienced when going from Jordan into Syria in 1982 but that, as they say, is another story) and they said, yes, it all felt a bit like prohibition.  I was glad they didn’t think about Syria.  It’s better to worry about whiskey.  Or contraband sheep.

When bad things are happening, a normal response is to stay home.  To hunker down.  I don’t know about the hoarding toilet paper bit, but surely, a bit of food and cat litter hoarding should be in order.  An abnormal response is, you might say, “&#*@ that, I’m going shearing!”

As I headed north, states were closing down, one after the other.  Back home, things had evolved and wearing masks became a thing.  Not wearing masks also became a thing.  I made it a policy.  People had to wear masks at shearing.   But some people didn’t.  They didn’t want to, didn’t have them, didn’t think they needed them.  Other people stayed in the house while we sheared, fearful for the germs our mouths might spew into the air.   We had to pee behind the barn.  No one wanted our germs.  Such strange times.

I bought a thermometer and took my temperature every day.  Then they said, no, it’s not just a temperature, your oxygen levels go down so slowly you don’t realize it and then you collapse.  I didn’t like the idea of collapsing, so I bought an oximeter to measure my oxygen content and pulse rate.  Eventually the thermometer got sacrificed to the butt of an alpaca who was not feeling well, so since mid-April I’ve no idea if I’ve run a fever.  But so far I’m chock a block full of oxygen.  Still…  I wait to get sick.

I’ve never knowingly suffered from allergies.  I’ve never knowingly suffered from a great many things; I have neither time nor patience for physical peccadillos.  But this year I coughed.  I coughed all down the eastern coast of the United states, and back up through the mountains of Georgia.  Apparently, I have allergies.  Who knew?  I’m pretty sure, though, that all allergy sufferers were looking up “symptoms of Coronavirus” on the web every night.  I know I was.

Now shearing season is grinding to a halt; there are a few stragglers here and there who were out of town, or forgot their shearer no longer lived on the east coast, or just remembered there were sheep out in the field.  I guess I’m going to become one of the housebound.  Oh, I have plenty to do.  I’ve already started painting the fencing at my farm – which should, by my reckoning, keep me busy for about a year.  But I’m staying safe.  I really hate respiratory illnesses, and I hate fever even worse.  But more than all that, I’d hate not being able to shear.  I mean, I’d hate being dead, but before that, I’d really hate not being able to shear.

After some ‘isn’t it grand to be home” time, I’ll be headed back to Florida soon for fall shearing, land of a veritable COVID explosion.  I’ve already procured extra masks, a gallon of rubbing alcohol, and have learned that warm beer is better than no beer.  No matter what, though, I intend to be safe. I hope you do, too.

2 thoughts on ““Be Safe”–Shearing in the time of Corona”

So happy to start looking at early spring shearing

I’ve tried to figure out why these babydoll shee

Sweet Sarah May, my own sheep whom I just brought

This kitten was determined to try to go home with

Big Girls. A challenge given their size, but gener

Best gift ever for a shearer! #sheepshearing #she

These three boys RAN to the farthest corner of the

Finnsheep, objecting to my watching them as they e

Clyde, I love you no matter what. But you could ea

Itchy Badger after his fall shearing at @poplarspr

I just love cleanly shorn sheep out on fresh pastu

Waiting in the salon reception for his hair appoin

Before, during, and after. This ewe waited a long

Karakul sheep, raised by a Turkish man who hearken